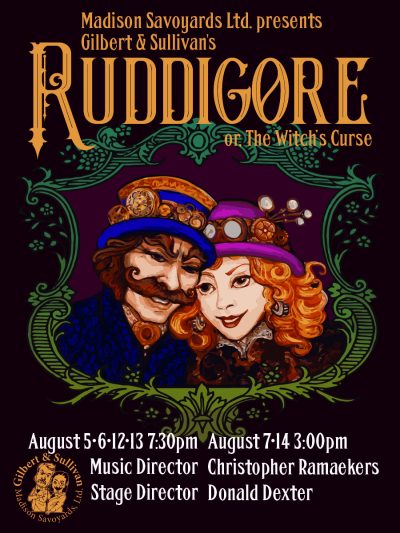 Performed at the Bartell Theatre on the Drury Stage

Arthur Sullivan’s exhilarating music and W.S. Gilbert’s wicked-funny wit impale the Victorian horror genre in Ruddigore, or The Witch’s Curse.  Musicians, singers, and dancers take the stage to perform this rarely produced and hilarious tale of madcap macabre.  As Douglas R. Miller of the Harvard-Radcliffe Gilbert & Sullivan Players said of Ruddigore, “Melodrama and satire both function through distortion to the extremes; Gilbert has fused the two into a high comedy of extreme characters and circumstances.”

While a belief in spectral intervention is not as common as it once was, we are still the anxious children of our parents. Even after our parents are gone, we still have a nagging dread of disappointing them, coupled with the worry that our most personal desires are an affront to society. The operetta’s love story parallels the ghost story in that two young people who ought to be in love are not allowed to be, due to a strict interpretation of Victorian etiquette. By taking these notions to farcical extremes, Gilbert creates a comical catharsis that liberates us from our fears.

Sir Arthur Sullivan’s music for Ruddigore is in turn romantic, melodramatic, and humorous. Some consider this score to be the finest that he composed for any of the Gilbert & Sullivan operettas.