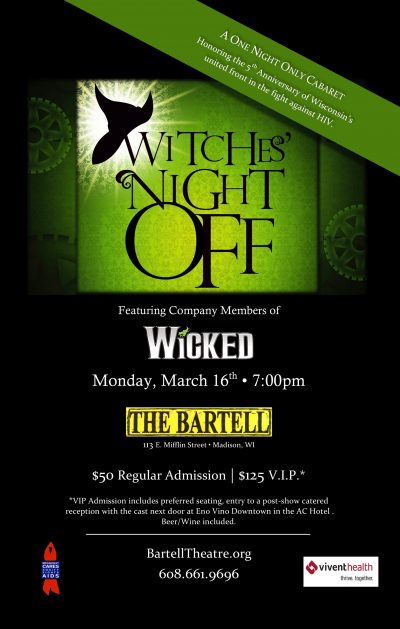 Vivent Health (formerly AIDS Resource Center of Wisconsin) and members of the National Touring 5th Company of WICKED will host WITCHES’ NIGHT OFF, a one-night-only cabaret honoring the anniversary of Wisconsin’s united front in the fight against HIV. WITCHES’ NIGHT OFF is an evening of “Non-Ozian” song and dance performances by the cast members of the WICKED National Tour.

WITCHES’ NIGHT OFF is part of an ongoing cabaret series of performances by the touring company to support charitable causes. The WICKED, [Munchkinland] National Tour has raised over $5.7 million in donations for Broadway Cares/Equity Fights AIDS and local AIDS service organizations across the country.

Some live auction items include:

Witches’ Night Off will be performed on the Drury Stage.

*VIP admission is $125, which includes preferred seating and a VIP post-show reception with WICKED cast members at Eno Vino Downtown (1 N. Webster Street) in the AC Hotel next door. The reception will be catered and includes beer & wine. Regular Admission tickets (for the show only) are available for $50.
All proceeds benefit BC/EFA and Vivent Health.