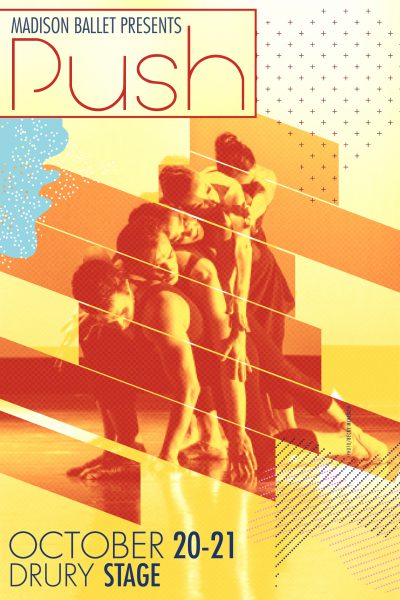 “…the most diverse repertory program the company’s ever done.”
—Arts Writer Susan Kepecs

Madison Ballet launches its 2017-2018 season with Push, a mixed program that pays tribute to the roots of ballet, and at the same time propels the art form into the future. Push takes ballet to the edge of the art form, pairing the drama and precision of ballet with contemporary choreography and music.

Push shines the spotlight on the athleticism and allure of each dancer with an evening of shorter classical and current works.

Think you know ballet? Push your own boundaries and you’ll be seduced and surprised by Madison Ballet’s Push.

ADDITIONAL PROGRAM NOTES
Artistic Director W. Earle Smith is restaging two of his own ballets that premiered 2008 when the Madison Ballet launched its first professional company. Now, with a roster of 17 seasoned dancers—six of them new to the troupe—he’s expanding on the original works with more challenging choreography and an extended pas de deux for veterans Kristen Hammer and Jackson Warring. Smith’s Concerto Veneto will also feature live music from a quintet of musicians from the Wisconsin Chamber Orchestra, playing Alessandro Marcello’s “Oboe Concerto in C Minor.”

By contrast, Smith has included a nod to classical ballet by putting four well-known classical pas de deux on the program, a change of pace for a company that is often trying to break out of the classical mold.

“For me,” Smith says, “repertory evenings typically have been about new works, usually edgy and athletic ones. On this program I’m pushing the repertory concept into new territory. There’ll be four pas de deux that are quintessential classical ballet.”

These four dances include some of ballet’s most dazzling choreography, created to “wow” audiences with high-flying leaps and lightning-fast footwork. A highlight of the program will be the Diana and Aecteon Pas de Deux, featuring Shannon Quirk as the goddess of the hunt and Shea Johnson, her handsome mortal lover. The ballet has become well-known as a spectacular showpiece for a ballerina and her partner.

Push will close with a new work, Capricious, by frequent guest choreographer General Hambrick. Hambrick’s perfectly blends the classical and contemporary in a ballet that is a series of little shifts from light and playful to dark and moody.