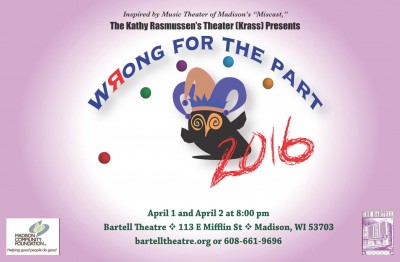 She’s always wanted to play Han Solo. He hankers to rock Blanche Dubois.
They’re no longer ingénues but want to do that famous love scene.
Or they’re still young, but thought they’d try the Gin Game.

Now it its fifth year, past Wrong for the Part performances included monologues and scenes from plays, movies, books, songs – and absolutely nobody played a part that was right for them. Inspired by Music Theater of Madison’s Miscast, this year promises again to feature skilled area actors in monologues and scenes that no director would sanction.

Come laugh, love, be moved, and support Madison’s only theater that focuses on promoting women playwrights and directors.