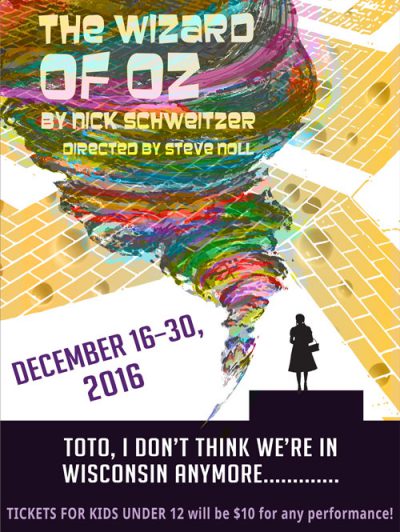 THE WIZARD OF OZ

Dorothy is whisked away from a Wisconsin Dells waterpark on a waterspout, and winds up in the wonderful Land of Oz! There, she meets all the beloved characters from the Oz literature and films, with a few little twists: in typical British-panto style, several men dress as women – but think Monty Python, NOT La Cage aux Folles! Some women dress as men, some people dress as animals, and the critters who fly have a definite Wisconsin flavor… The show is loaded with silly song parodies, slapstick humor, and corny jokes. Cheering for the heroes and booing for the baddies is strongly encouraged in this family-friendly theatrical treat!

TICKETS FOR KIDS UNDER 12 will be $10 for any performance

GROUPS OF 10 OR MORE enjoy $15 tickets for any performance