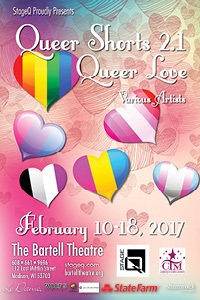 A Life Enriching Community
A Play by Philip Middleton Williams
Directed by Malissa Petterson
Adam and Paul, a gay couple in their sixties, settle into their new home, a retirement community in Florida, and come to terms with their new situation, the changes that life has brought them, and the baggage that they have brought with them as well.

NON-REFUNDABLE
A ten-minute play by C.J. EHRLICH
Directed by Isa Leigh
In NON-REFUNDABLE two women in love, tired of pretending to be “just friends who work together” at their school back in Bible Belt Kentucky, take off for a vacation, hoping to “exhale”. But it feels like the Stasi is watching them as fiercely as the folks back home. But an unlikely invasion of their hotel room teaches them both that sometimes the only way to get what you need is to say no.

A LOVELY LITTLE LIFE
By Dan Berkowitz
Directed by Heather Renken
Kitty and Sylvia reminisce about their long life together.  How it began, how it ended and lessons learned along the way.

Never Too Old
By Eli Effinger-Weintraub
Directed by Simone LaPierre
Troy is having a mid-life sexual identity crisis.  Along comes Evan, who opens Troy’s mind to possibilities, while Troy’s daughter Gina and her fiancée Sarita offer their support to Troy on his new found “freedom”.

LUNCH WITH “FRIENDS”
A One Act Play by Rhea MacCallum
Directed by Jan Levine Thal
When old “friends” meet for lunch a guest with unexpected news joins them.

Rex Turns 50
By Steven E. Smith
Directed by Jim Chiolino
It’s Rex’s birthday and his partner Spencer wants to make it the perfect day to turn 50.  Against Rex’s wishes, Spencer has lined up a few surprises. What will the final surprise be?

SLOW DATING
A one act drama written by Adam Szudrich
Directed by Michael Bruno
After happily married Esther leaves a “Speed dating for seniors” event, she finds herself sharing a taxi with a stranger who has a few ideas of her own on what should happen next.

FAIRY: TALE OF TWO BROTHERS SEPARATE(D)
A construct to explore men, masculinity, gender, sexuality, power, and privilege.
By Steven P. Perkins
Directed by Edric Johnson
Between two sides is always where any good story lives.  This is a tale, a fairy tale of two brothers separate and separated.  Once upon a time — well, isn’t that how all fairy tales begin?