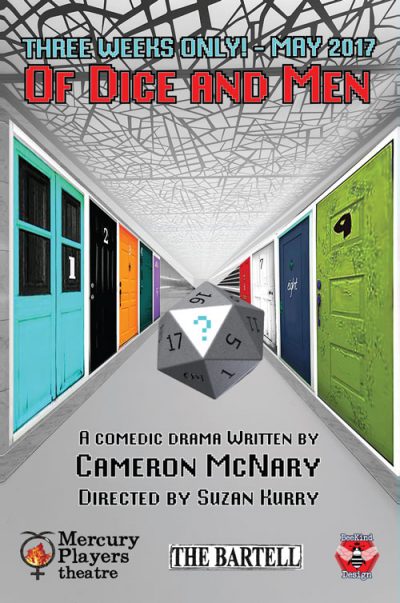 OF DICE AND MEN shows the world that most D&D gamers aren’t isolated, virgin-for-life losers: theirs is a social hobby not unlike poker or fantasy football. The play explores the rich friendships and romantic lives of a group of lifelong friends who are NOT stereotypical, Cheetos-stained, acne-blighted geeks. AT ALL. These men and women are attractive, smart, charming…and facing some major changes in their lives. Humor, brutal honesty and the good-natured kidding of people who know each other far too well culminate in an unforgettable evening that will make you laugh and think – and do so in a way that celebrates the power of gaming to bring people together, never once apologizing for it.

There will be a talk-back with the entire cast following the performance on Sunday, May 28th.

A talk-back with playwright CAMERON McNARY will take place after the performance on SATURDAY, MAY 27 CAMERON McNARY is a playwright, actor, and deeply committed geek of just about every kind.  He wrote his first play, Of Dice and Men, in 2006. Shoggoths on the Veldt (a lovecraftian Victorian adventure/romance/comedy) and Bed and Breakfast of the Damned (a door-slamming sex farce with zombies) followed.

He has been a theatre professional for over 15 years, and a Dungeon Master for over 30. He has been the Creative Director and a cast member of the Play Better Podcast, about tabletop gaming and how it can bring people together, for the past three.

He lives in Columbia, MD with his wife and two children.

There will be a talk-back with MATT FORBECK after the performance on Saturday, May 20th.

MATT FORBECK is an award-winning and New York Times-bestselling author and game designer with over thirty novels and countless games published to date. His latest work includes the Star Wars: Rogue One junior novel, Dungeonology, Captain America: The Ultimate Guide to the First Avenger, Halo: New Blood, the Magic: The Gathering comics, The Marvel Encyclopedia, and the upcoming Shotguns & Sorcery tabletop roleplaying game based on his novels. He lives in Beloit, WI, with his wife and five children, including a set of quadruplets. For more about him and his work, visit Forbeck.com

There will be a talk-back with SKIP WILLIAMS after the performance on Thursday, May 25th. SKIP WILLIAMS is an American game designer and author best known for his work on the D&D 3rd Edition game and for his many activities in support of gaming fans, including stints with the RPGA Network (where he co-edited the award-winning POLYHEDRON Newszine), and his work with DRAGON Magazine (where he served as contributing editor and author of the long-running Sage Advice column). Skip served as director of the GEN CON Game Fair during the formative years of 1980-1983, and is currently associated with the Gary Con game convention, which runs every March in Skip’s hometown of Lake Geneva, WI.

There will be a talk-back with JOHN KOVALIC on Friday, May 26th. JOHN KOVALIC is a prolific and award-winning cartoonist and game designer, with hits such as APPLES TO APPLES and MUNCHKIN under his belt. His work has appeared everywhere from the NEW YORK TIMES and ROLLING STONE to DRAGON MAGAZINE. His comic, DORK TOWER, focusing on four roleplayers, became one of the first webcomics, going online in 1997. He is a co-founder and co-owner of Out of the Box Games, and helped create the revolutionary party game, APPLES TO APPLES, which went on to sell fifteen million copies (and counting). He’s also responsible for the art behind perennial best-selling game, MUNCHKIN, with a world-wide following. He’s drawn nearly 6,000 cards for the game and its spin-offs, and wouldn’t mind a spot of whiskey because of it. John has worked on over 100 games and game supplements. He became the first cartoonist inducted into the Games Hall of Fame in 2004. In his spare time, he searches for spare time. For gaming.