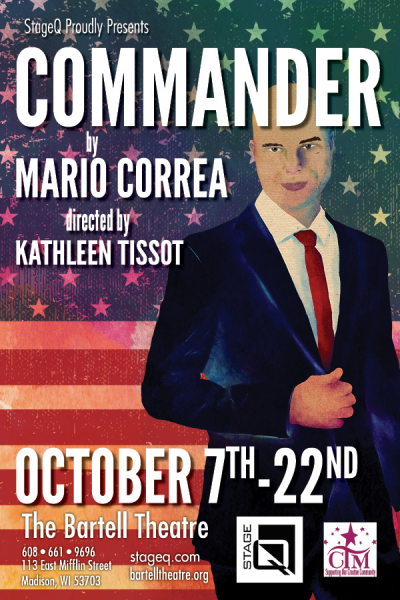 In this award-winning darkly comedic play, an ambitious politician battles public doubts, personal demons, and his own partner in a troubled quest to become President of the United States.

COMMANDER centers on the complicated relationship between Ned Worley, a former college professor who becomes Governor of Rhode Island, and his openly gay partner, Richard, who sees little to gain – and much to lose – from Ned’s bid for the Presidency.

Ned’s campaign is managed by Frank Sands, a hardened operative determined to extract little more than a payday, and Zack Maines, an idealistic young aide who may be the only one who grasps the true stakes of Ned’s candidacy.

Volunteer Sign Up
Wanna see the show for free?  Sign up to volunteer as an usher or as a Box Office Volunteer or House Manager!

Note: Box Office and House Manager shifts need training prior to signing up.  Contact the Bartell Box Office Coordinator by calling (608) 661-9696 to set up an appointment to be trained or Go Here to sign up through SignUp.com.