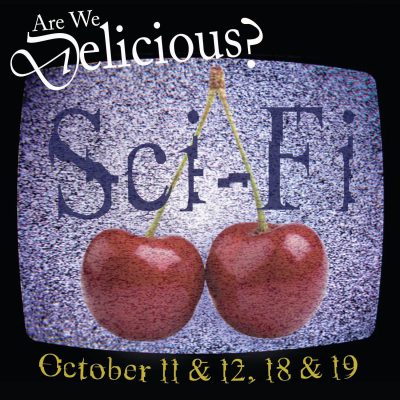 Are We Delicious? Sci-Fi

A full-length Sci-Fi play written, rehearsed and premiered in a single week by 8 Madison performers.

Beginning with only their imagination and the barest outline, 8 Madison writer/actors create a full-length Sci-Fi play in a single week. Ensemble members are chosen for their writing and acting ability, testing their creativity and craft in a way unmatched in other shows. Each day of the Delicious week tests a different skill set as they write, memorize and perform their plays. A carnival-like atmosphere on stage and off leads to an enjoyable evening for all.

Admission price is $14 with a running time of 80 minutes with a 10 minute intermission.

Are We Delicious? is an ensemble of Madison writer/performers who conceive, write, rehearse and perform an original one-hour comedy-­variety show in a single week.  Everyone writes, everyone acts and no one can rest until the final curtain.