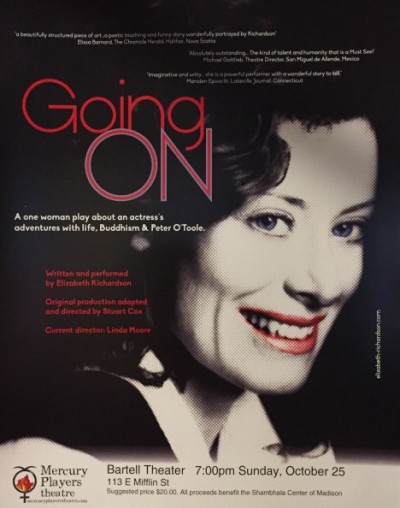 Suggested Donation - $20
Cash or check only

ONE NIGHT ONLY
In this compelling, raw and hilarious one-woman show, Elizabeth Richardson counterpoints her adventures as a young actress on a theatre tour with Peter O’Toole and her later challenges as a Buddhist on a three-year meditation retreat. She manifests dozen personas, including O’Toole’s, intertwined with a heartbreaking mother/daughter relationship. Going On premiered at the Shelter Theatre in San Miguel de Allende (Mexico, 2012) to outstanding reviews, was selected for the SuperNova Festival (Halifax, 2012) and was a festival award winner at the Atlantic Theatre Fringe Festival (2012).  In July 2015 Richardson remounted Going On at The Waiting Room in Halifax with KAZAN CO-OP. The Chronicle Herald described it as “…a beautifully structured piece of art…a poetic, touching and funny story, wonderfully portrayed by Richardson.”  In September 2015 she brought the show to the Vancouver Fringe Festival. Elizabeth Richardson is an accomplished Canadian actress with over 30 years experience. A graduate of the London Academy of Music and Dramatic Arts (LAMDA) she has performed in major theatre, film and television productions in England and Canada. Elizabeth has worked with acclaimed international actors and directors including Peter O’Toole, Brian Cox, John Madden, Adrian Noble and Roger Michel, and played leading parts in London’s West End, the Bristol Old Vic, the Neptune Theatre in Halifax, the Shaw Festival in Ontario and Canadian Stage in Toronto. Parallel to her acting career, she has over 20 years’ experience as a practitioner and teacher of mindfulness meditation, leading meditation and awareness programs in Canada, New Zealand and Chile. For more, see: http://elizabeth-richardson.com/going-on