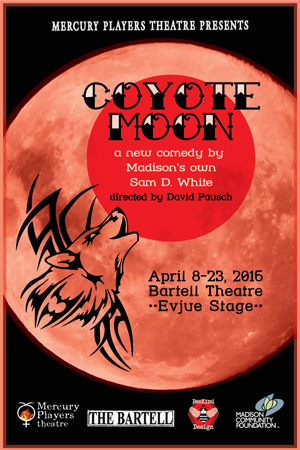 Frank hates his life: he lost his job, his pregnant girlfriend’s marrying another guy, and he’s pretty sure he is going to turn into a “were-coyote” when the full moon comes up tonight. Maybe the best thing to do is lock a tow chain around his neck and…but then again…maybe not. Young Frank’s mom, his former fiancée, his neighbors and friends all gather to witness (and perhaps, enjoy) his growing distress as moon-rise draws nigh. Coyote Moon: a trickster love story with a small-town tavern, Eddie Arnold, the full moon, a touch of the supernatural – and a whole lot of beer.