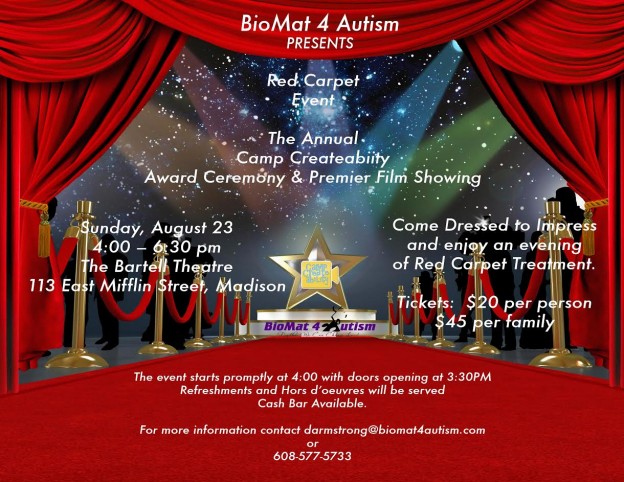 Camp Createability is a Video and Entertainment program for individuals with Autism or other disabilities.The event is to celebrate the films made during the participants’ 7 day film camp. The films and PSA’s will be shown along with the short movies that they made and a behind the scenes film. We will culminate the event with an award ceremony.

Tickets are suggested donation. Note: Online donations do not guarantee tickets for show.
Contact Debbie Armstrong: 608-577-5733 or darmstrong@biomat4autism.com for donations.

“Creating a film is a monumental effort for any group, but for those with Autism or other disabilities, vital skills must be mastered to succeed, including cooperation, negotiation, listening, and taking direction. Participants will learn those skills as well as be introduced to many trades, animation, set design, script-writing, acting, dancing, singing, prop/set building, ward-robe, make-up, budgeting, directing, filming, editing, and other tasks necessary for a film.” Camp Createablity